Whether you’re family, a friend, or someone I’ve never met, I’m so happy you’re here!

Steve and I have now been living the van life around America for almost two full months and we have seen so many amazing things and we have met some incredible people! If you’re new here, I will quickly recap our trip so far. We quit our jobs, bought a used converted Ford cargo van, and hit the road on February 1st. We started with Groundhog Day in Punsutawney, PA, made our way down to Washington, DC (Let the Journey Begin), and then continued visiting friends and family all the way down to Florida (Continuing South). Then at the beginning of March we quickly zipped west from the Florida Keys to Arizona (Zipping West!) because of our March 7th permits for Havasupai, where we camped for two nights near the incredible blue waterfall oasis hidden in the Grand Canyon (Havasupai Hike). Our next stop on this adventure was Arizona!

A quick side note: Steve and I have been taking some videos along our travels and I will try to share some of those moments with you all. Here is some footage of manatees swimming by our kayaks in Crystal River, Florida! If you have any recommendations for video editing software, let me know!

We wanted to explore some of Arizona before backtracking to New Mexico, which we had skipped due to our rush across the country. Since we were so close to the south rim of the Grand Canyon, we couldn’t pass up the chance to see such an amazing and iconic place. Steve and I had visited the Grand Canyon briefly on our Western trip a few years back, but I still felt drawn to its overwhelming beauty. Before driving all the way north, we stopped for the night in Williams, AZ, which is a charming little old western feeling town known as the “Gateway to the Grand Canyon”. It was a bit hokey and touristy but we found a cheap little motel where we could let our muscles recover from our Havasupai hiking experience.

The first of many Smokey the Bears

As part of our one brewery per state pact, we decided to try some tasters at the Grand Canyon Brewing Company. They were quite delicious and I was especially happy because they had a pumpkin porter (in March!) and I can’t get enough of pumpkin beers! 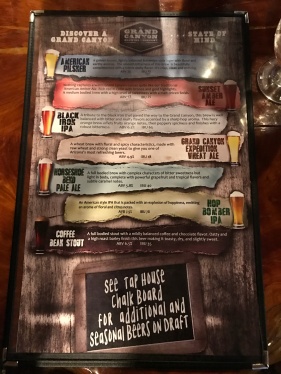 We had to try them all!

So rustic and cozy

We had a nice chat with our bartender who recommended a route to the Grand Canyon which included a stop at the lesser known Wupatki National Monument, which I described in my last post!

That afternoon after leaving Wupatki we made it up to the Desert View area of the Grand Canyon and explored the awesome 70-foot tall stone watchtower that opened in 1932. We then found a spot on some rocks on the canyon edge and watched as the sun started to sink, flooding the canyon with warm, golden light. After a little while, as I started to think that all of the fun was over, the sky suddenly lit up in brilliant shades of pink and orange. It was hard to capture the raw beauty of the moment with my camera so you’ll just have to take my word for it! As with all incredible sunsets, it was fleeting, and soon the whole area was covered in a blanket of darkness. It quickly went from a special sunset with the collective joy of tourists filling the air to a vast and looming darkness that spread down into the depths of the canyon. I remember feeling a shiver go down my spine – both from the drop in temperature as well as the eerie darkness that emerged. 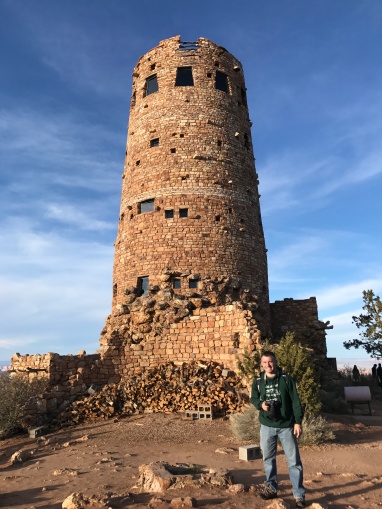 Steve by the watchtower

Warm sunset glow in the canyon

We decided to camp near the south rim so that we could enjoy the impressive views again in the morning. Unfortunately the snow and ice had only recently melted and the dirt forest roads were actually mud. The van did not have a good time navigating to a campsite. We eventually found a spot, but by then it was late and time for sleep. In the morning we carefully escaped the mud and drove to the canyon rim one last time in order to make coffee as the sun slowly rose over the canyon. 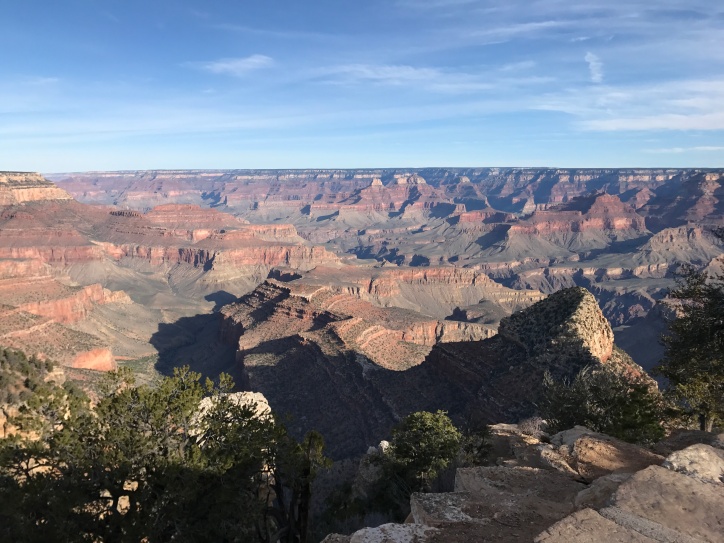 Amazing views in the morning 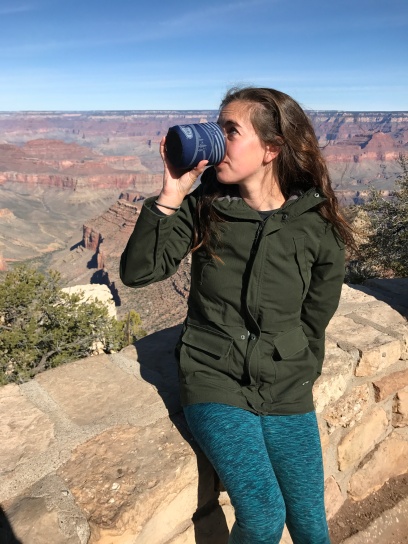 Sipping coffee at the Grand Canyon

We could have stayed for weeks exploring and hiking around the Grand Canyon, but we had so much yet to see and decided to move on. We drove south near Flagstaff, AZ to the Kaibab National Forest to find a place to sleep. We found a really great free campground with a dry dirt road and individual campsites each with an individual stone fire ring. We loved the area so much we decided to make it home for a few days. It felt nice to be able to relax and enjoy some time in the forest rather than running around! We did cooked a couple of delicious tinfoil meals in the campfire, sipped whiskey by the fire while listening to Dave Matthews Band, and gazed up at the stars twinkling above. We also helped another van dweller get his home-on-wheels out from the mud – a feat that took an hour, some campfire logs, and the strength of as many campers as we could find (which wasn’t too many since the campground was nearly empty).

Before leaving Flagstaff, we were convinced by my parents that we must get breakfast at MartAnne’s. We were certainly not disappointed! We had some incredible Mexican style breakfast plates and burritos that tasted better than anything we had eaten for days. Also the place was super cute with a very friendly staff. I would highly recommend breakfast here if you’re ever in Flagstaff! 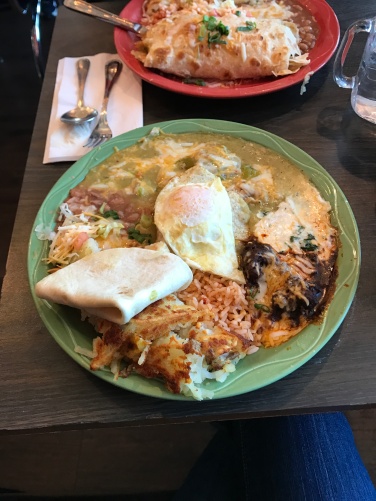 The “volcano” was amazing

Steve and his breakfast burrito

We then made our way to the beautiful red rocks of Sedona. We drove around for a while taking in the views and stopped to hike to Bell Rock. Apparently Sedona is known for having vortexes (vortices?) in a few places where energy is either entering or leaving the earth. It is supposedly strong enough that you can feel it and have some kind of spiritual awakening. Bell Rock is one of the locations known for having vortex energy, but I’m not going to lie to you , I didn’t feel anything on that hike except hot and sweaty. Sedona was very beautiful but a bit too crowded for our liking (I believe it was spring break in Arizona at that time), so we quickly moved on.

Beautiful landscapes along the trail 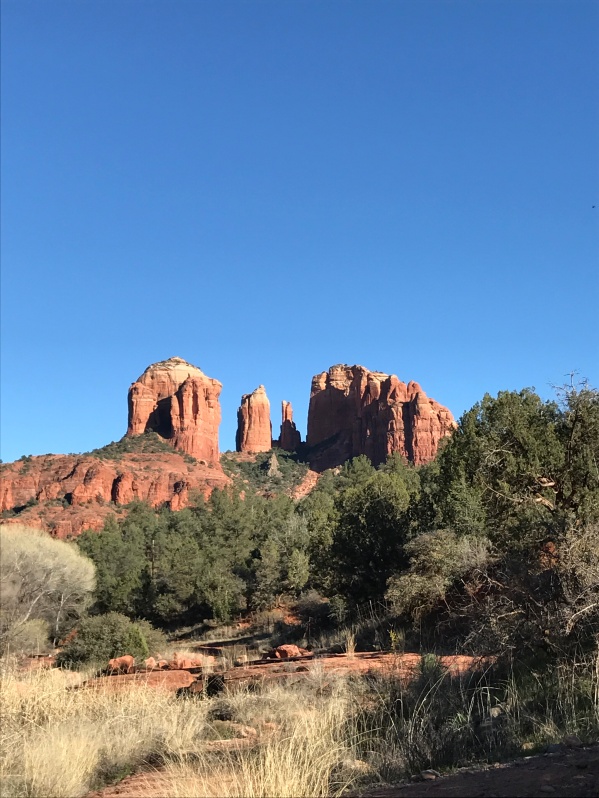 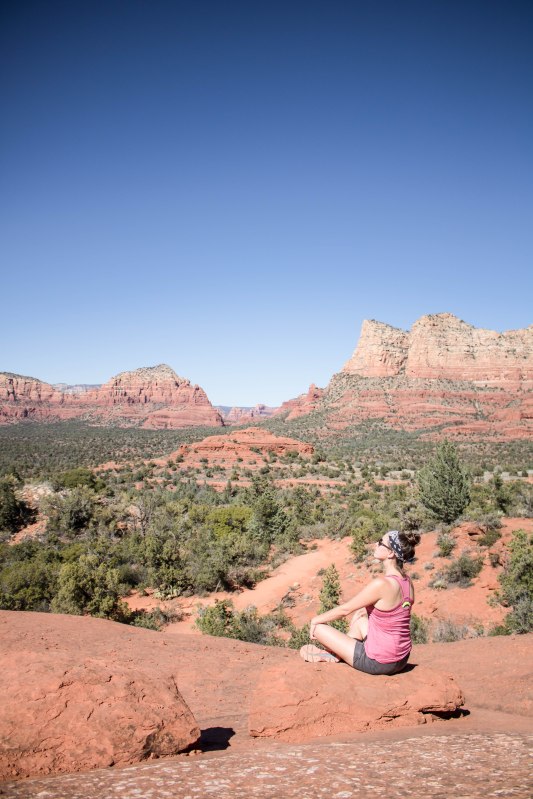 We spent the next few days driving east through to New Mexico and enjoyed staying at their rest area a second time! The next day we drove to Guadalupe Mountains National Park and the plan was to stay in one of the first-come-first-served cheap campsites or RV spots in the park. Unfortunately the park was much busier than expected and we arrived too late, so the campground and all RV sites were full. Thankfully I had a bit of service (Yeah Verizon!) and the internet helped us find a nice free campsite out in some BLM land. We even had some lovely cow neighbors!

The next morning we made our way back to the Guadalupe Mountains in order to hike to the highest point in Texas, Guadalupe Peak at 8,749 feet. It was a hot and sunny morning and the beginning of the hike was pretty tough. 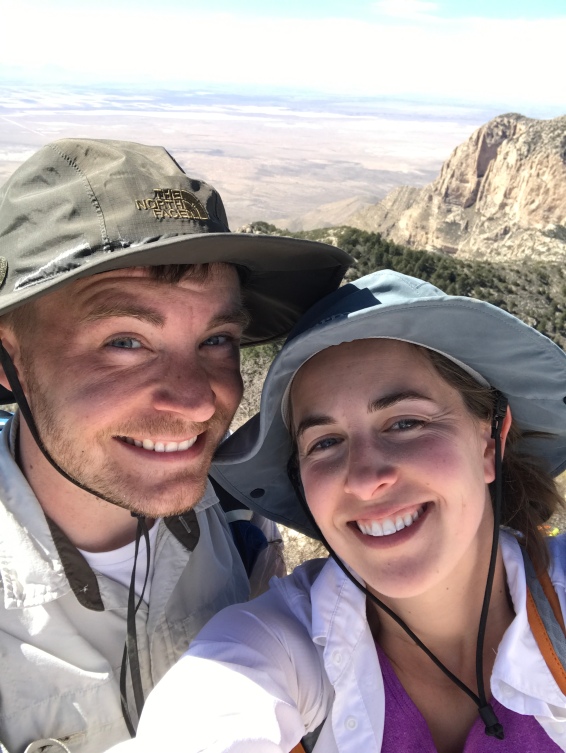 We kept pushing through and ate some granola bars until we got our first wind. It took us 2 hours and 40 minutes to hike to the top, where there was a nice triangular summit marker and a crowd of people resting. The views were pretty nice, but nothing spectacular. There were flies and no shady spots to provide relief from the sun, so we made our way back down. The descent took two hours and was a pleasant steady downhill hike in the the shade. Overall this hike was 8.5 miles round trip with 3,000 feet of elevation gain and took us 5.5 hours including our rest at the summit. This was our 13th State high point. The next state we will travel through is New Mexico, but I have a feeling their state high point is snowed in and we may need to revisit it another time! 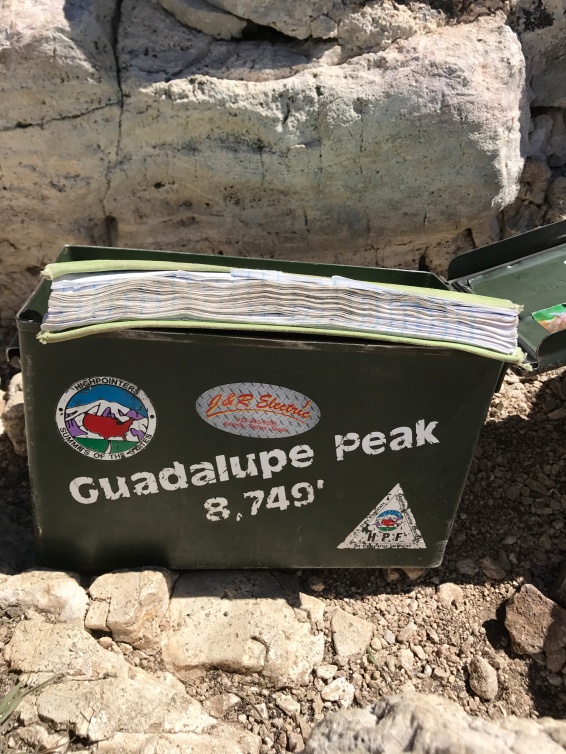 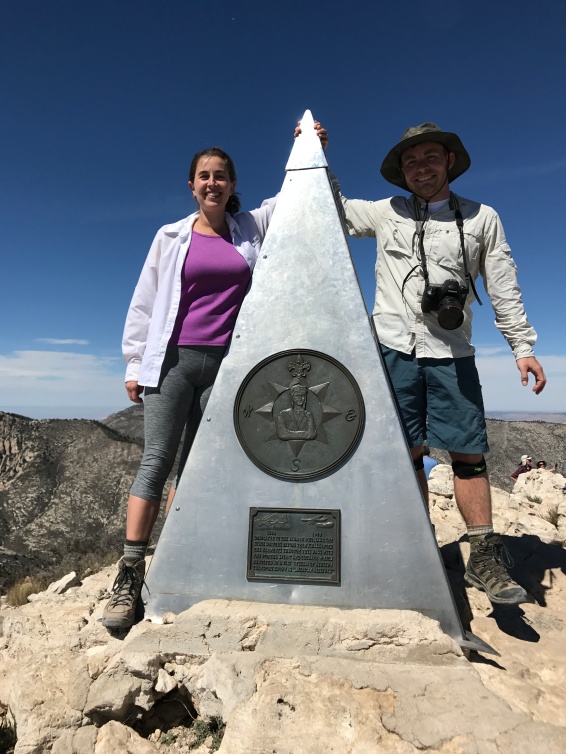 Steve and me at the summit marker
At the time of this writing, we have already spent many days in New Mexico, but I will save that for a different post. As always, if you have any questions or travel recommendations for us, don’t hesitate to shoot me an email (carrieoutdoors1@gmail.com) or a DM on Instagram (@carrieoutdoors).  If you have your own travel blog you’d like me to check out, send a link along as well!

That’s all for now and thank you for reading! 🙂

Exploring and hiking! View all posts by carrieoutdoors